Banana "Ice Cream" (made from bananas ONLY!)

We really like bananas here.  They're pretty inexpensive compared to some other fruits and all three of my kids like eating them.  Like most kids, my three also really like ice cream.  So when I saw a cooking segment on the Today show last spring showing how you can make "ice cream" from frozen bananas, I was all over it.  We made it several times last year and just made our first batch of the summer this weekend.  It's really yummy and hard to believe you can get the creamy texture of ice cream from only bananas. 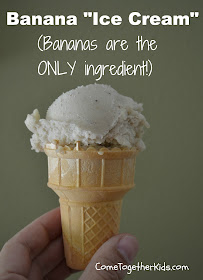 Here's what to do:

1.  Get some bananas.  We used several "extra ripe" ones that I found marked down at the produce market, but any ripe bananas will work. 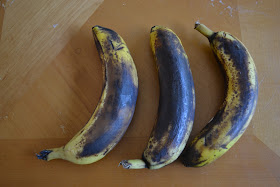 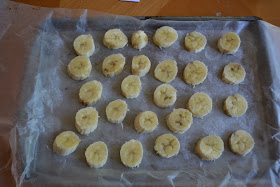 3.  Pop the tray in the freezer for a few hours until the bananas are frozen.  (Once they're frozen, you can also put them in a bag to use later).

4.  Put your bananas in a food processor or blender.  (NOTE:  I used a blender because that's what I have, but I think a food processor would have worked much better.  I had to keep pushing the frozen bananas down in the blender so the blades could reach them and it took a little longer for them to reach the right consistency) 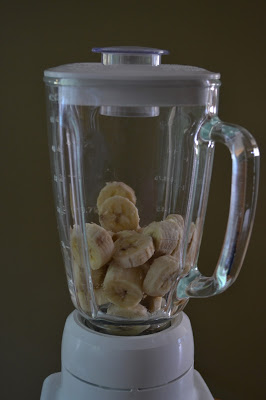 5.  Start mixing.  First the bananas will just get chopped up. 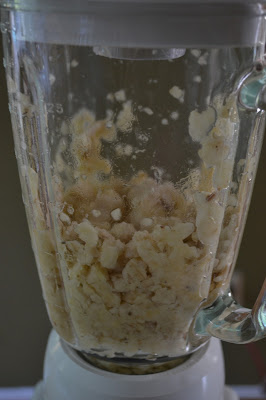 6.  But as you keep mixing and scraping down the sides, it'll get creamier and creamier. 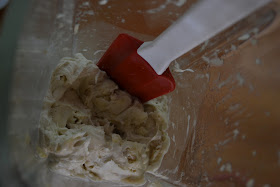 7.  You can eat it right now, just out of the blender/food processor, and it'll be like a soft serve custard. 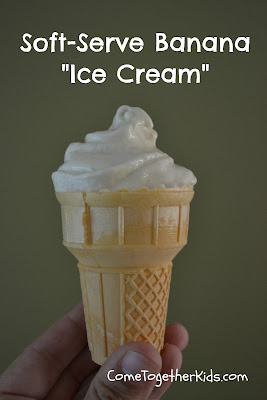 8.  Or you could put the mixture back in the freezer where it will get harder and more scoopable like regular ice cream.

You can also mix in other ingredients when it's in the soft-serve state ~ we like to add in peanut butter, chocolate chips or chopped nuts - YUMMY!!

NOTE:  We just use our blender or food processor to make our banana ice cream and although it takes a little bit of time and a decent amount of scraping down the sides, it works well for us.  However, my daughter was recently at a friend's house and her mom made the same banana ice cream using this  Yonanas Ice Cream Maker.  I wasn't there to test it out or use it myself, but the mom said it was really easy to use and worked really quickly.  I think if you try this out, like it and want to make it often, a machine specifically designed to work on frozen fruit might come in handy.